Many urban planners believe that one-way couplets are inherently high-speed and auto-oriented, and thus it is in vogue to convert one-way couplets back to two-way streets. There are good reasons to convert lower-volume one-ways to two-way in historic downtown grids, but in many other environments one-ways can manage Stroad-level traffic in far more pedestrian-friendly ways. This article discusses the virtues of one-way streets relative to 5 and 7-lane stroads. It concedes some weaknesses, and addresses common misconceptions. Part 2 focuses on existing examples and conceptual designs. Also see my StrongTown’s articles: Are One-Ways Really That Bad? and Can One-Ways be a Middle Way for the Suburbs? Can the tortoise win the race? Watch the video before reading this article, or read Innovative Intersections.

What is a Town Center, Couplet Intersection?

A Town Center Couplet Intersection is created any time one-way streets are involved. Though one-ways are not new or “innovative,” they can achieve high efficiency because there is no need for left-turn arrows, since there is no opposing traffic.

Imagine two typical suburban “stroad” highways coming together (high-speed street/road hybrid). Normally this would result in double-left turn pockets within a single massive auto-oriented intersection, accompanied by excessive congestion. But this diagram by Calthorpe Associates shows how the two highways can each be divided into lower-speed one-way streets as they cross, resulting in four smaller, friendlier intersections, where more parcels will have good access and visibility. The system of four intersections can handle more overall traffic than the double-left intersection it replaces, but importantly it feels like less traffic, because each intersection is small and each does in fact have less traffic than a single huge intersection. Is it ideal? Some would prefer, a full-grid with a dozen streets to disperse traffic. But that’s often just not reality. Sometimes in both greenfield and greyfield, there are or will be just 2 crossing highways with high traffic volumes. This is a better way to deal with that fact than 2 stroads! 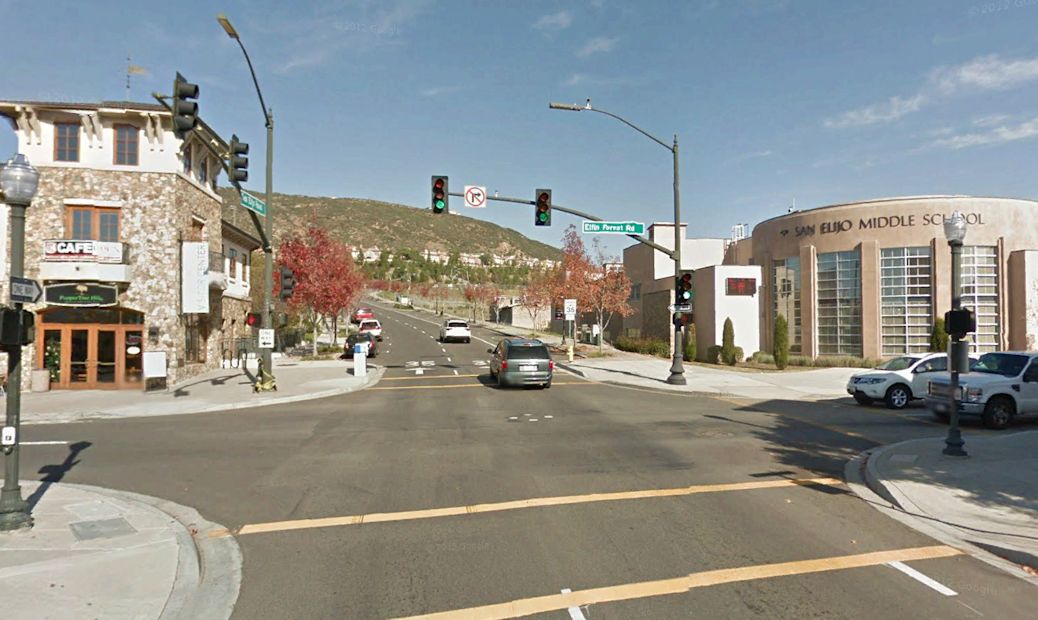 This Town Center Intersection in San Marcos, CA shows how a system of four simple intersections replaces what would have emerged as a single huge intersection (16 popular corner parcels, as opposed to just 4). Even though this system can handle much more traffic than a single signal with double-lefts, the photo shows that it does so within an attractive and safe pedestrian context, creating the appearance of less traffic because there IS less traffic at each intersection.

If a two-way street is small enough (1-lane each dir), then a one-way street with two-lanes in one direction will have higher maximum speeds (since you can’t pass slower traffic on the two-way). But most stroads are 5 to 7-lane cross sections (2 or 3 lanes each direction). In these cases, maximum speeds have little to do with whether it is one-way or two-way, but average speed is definitely affected, as 2-way stroads are far slower! Lane widths, on-street parking, stately trees (or lack thereof), signal spacing, speed limits, and the nature of the urban fabric have much more influence on maximum speed.

Compared to large stroads, one-way streets with closely spaced signals can achieve perfect signal synchronization. While that may sound “fast and auto-oriented” because green-lights are good for autos, it actually means it’s easier to achieve compliance with any desired speed limit. Want vehicles to travel 50 mph? Then make 12-ft lanes, no parking, and time lights to fall like dominoes at 50 mph. Want the same couplet street to be 30 mph? Go with 10-ft lanes, on-street parking, great street trees, paver cross-walks, and set the dominoes to fall at 30 mph.

Drivers will then drive exactly 30 mph, because at 35 they reach the next signal while it’s still red, but at 30 they hit green right-on. Two-way streets can’t “fall like dominoes,” so drivers almost always travel 5-10 mph faster than the posted speed limit as they see no reason not to. Many streets in Portland are timed for roughly 12 mph – and drivers comply because they see it is pointless to go faster. But convert those same streets to two-way, where signals can’t be timed for any discernible speed, and speeds will almost certainly increase.

“The Two-Way Conversion Helped Business!” (or did it?)

With many one-way to two-way conversions, it is common to hear that business has improved. Everyone’s excited because there is more walking and biking, and renewed development interest. Since the conversion grabbed the headline, people assume one-ways were holding development back. But such conversions often include significant Complete Street beautification efforts, traffic calming, etc. It is a mistake to conclude that one-way vs. two-way was the change of greatest significance when multiple changes occur.

In places where a more commercial street needs additional traffic and a more residential street needs less, then conversion may in fact be an element of breathing the right kind of life back into the area. But in areas where you have visions of an ever-expanding Activity Center where commercial viability and multi-family livability on both streets is important, one-ways can support larger, more walkable centers than two-ways.

75% Higher Auto-Accessibility Creates Walkability! How So?

Years ago I analyzed a Town Center system of four one-way intersections as a replacement for a single Stroad intersection. The image below is from Synchro, a common software used by traffic engineers. The two stroads are 7-lane arterials (see cross-sections below diagram). At the intersection there is a double-left, three through lanes, and a right-turn lane on each approach: Huge! I increased volumes until it reached Level of Service E, the failure point, which is about 1-minute of delay per vehicle. At that point there were 2,000 vehicles per hour entering the intersection from each direction, or 8000 total.

Then I analyzed the couplet with the same three through-lanes, and a dedicated right and left (see cross section). In the couplet case, each intersection has 5,800 vehicles (rounded to 6,000). The sum of all four is 24,000, but really represents about 14,000 unique vehicles, as all but right-turns use more than one intersection. But even at 14,000, that is 75% higher than the stroad intersection! And these relatively small intersections are uncongested (Level of Service D). But it’s a MISTAKE to conclude that 75% higher auto capacity proves couplets are auto-oriented. Consider this…

Here’s another way to look at it. The cross section below represents the stroad in the previous analysis, where the intersection can serve 8,000 vehicles per hour. It’s huge! 121 feet for pedestrians to cross, intimidated by 10 lanes of traffic! With a road this huge, speeds naturally gravitate to 45-50 mph. There is no chance that a quality walkable environment can emerge here.

Below is what the couplet of the previous analysis would look like at each of the four intersections. Remember this system can support 14,000 vehicles per hour, 75% higher, and all of that at just 30 mph! But it is also vastly superior for pedestrians and mixed use development in spite of higher traffic.

Some will look at the 5-lanes of this couplet and say “still too big.” Ok, then drop a lane and remove the right or left pocket at the intersection. No problem! It can still handle the same 8,000 that the 10-lane stroad was handling. But if pending walkable development needs it to handle more than 8,000 (lest said development not get built) it’s easy to add elements back in and still have a walkable situation, relative to the stroad alternative.

There is nothing inherently auto-oriented about one-way streets, relative to large two-way 5 and 7-lane stroads. They need not be high speed unless designed that way, intentionally or unintentionally. They are more efficient at moving more vehicles with less delay. But just because something good has happened for cars (less congestion), we need not conclude that something bad has happened for other modes. When all modes are doing well, there is no drag on a Center’s ability to expand.

Traffic delay creates the feel of auto-oriented, because vehicles stacked up for blocks annoy everyone, and pressures engineers to “go rouge.” Couplets help vehicles keep moving even at low speeds.

Articles in the Series, and Other Resources

TownCenterIntersections.org has some existing locations, along with videos, articles, and other links.
Top-10 Advantages of One-Way Couplets: A short pdf I wrote years ago, with similar points
Top-10 Arguments Against One-Ways, Addressed: Rebuttals to common arguments against couplets.

If you think this topic is important, please Share!